A pair of urban peregrines which failed to rear chicks last year following the near death of the female have had a busy Easter resulting in the hatching of 3 chicks.

The first egg of the 2018 season was laid whilst the UK was in the grip of the ‘Beast from the East’ and more drama followed when the female became egg bound, leading to fears she would die.

Since the arrival of the first egg of 2019 on March 14th avid web cam watchers, Nottinghamshire Wildlife Trust and Nottingham Trent University have all been keeping their fingers crossed for a more successful nesting season; and there was much relief when the first egg hatched on Easter Sunday.

This year’s eggs were laid high on Nottingham Trent University’s Newton Building between Storm Gareth and Storm Hannah and whilst the chicks hatched during the hottest Easter on record, further bad weather is forecast in the days ahead. However, Nottinghamshire Wildlife Trust remains hopeful of positive outcome this year.

Speaking about the arrival of the chicks Head of Communications & Marketing Erin McDaid said:

This nest has been subject to some extremes of weather in the past 10 years with everything from deep snow to torrential rains to heatwaves and whilst we’ve had some losses peregrines are tough and adaptable birds and this nest site has been very successful over many years so despite the sadness and the fact that it’s very early days for the new arrivals we are hopeful we’ll have a positive outcome this year.
Erin McDaid
Nottinghamshire Wildlife Trust 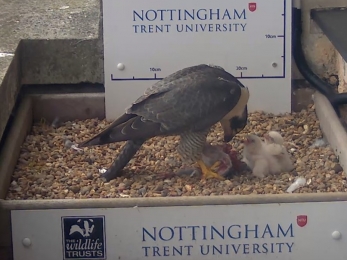 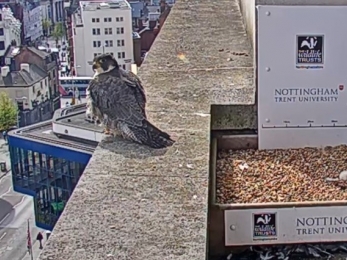 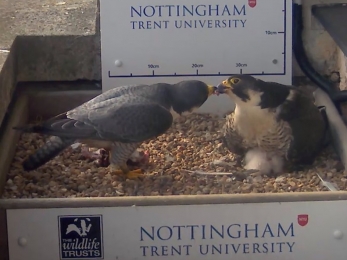 Cameras were originally installed by Nottingham Trent University to help protect the birds from the persecution but these were replaced with high definition cameras due to its desire to enable people from across the world to view and learn about the bird’s behaviour. The live cameras have become extremely popular over the years with viewers from at least 65 countries.

The peregrine family can be followed at either the NTU website here or on this website at  www.nottinghamshirewildlife.org/peregrine-cam

Huge upsurge in webcam views from March to May and interest continues as chick begins to stretch its wings.

New hope for popular peregrine family after unusually long wait for a chick comes to an end.